We recently read an interesting and very informative article about the $3 Billion dollar problem faced by the US Military.  Navy ships are subjected to some of the harshest conditions imaginable. The typical gray color of a Navy ship seen up close can be a yucky harsh indian red in places.  This is the effects of corrosion on Navy ships. 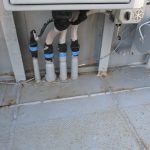 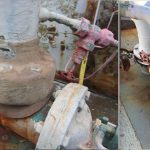 Humanity has been battling rust since people first began using metal for their purposes. The Bible talks about it, as do Greek and Roman writings and works by William Shakespeare, said Jonathan Waldman, author of the book “Rust: The Longest War.” He describes rust as “the most destructive natural disaster on Earth.”

Oxi free was applied to multiple surfaces on the USS McFaul. The ship was deployed and at sea for more than 9 months and upon returning all surfaces that were applied  with Oxifree were corrosion free. Moreover, we have plans to apply Oxifree and OxiTape to the more than 500 kick pipes on the ship in the future.  OxiTape forms a rock hard bond that resembles a cast.  Superior protection from direct hits and corrosion protection for years to come.

Ship maintenance is needed to really tackle rust. Both on the ship and at a dry dock.  Maintenance with typical corrosion inhibitors requires special handling and procedures.  The area must be blocked off an there is lots of prep work like sanding. After donning several layers of clothing, including coveralls and a protective hood with a breathing apparatus, crews shoot ground-up minerals like copper slag through a blast hose to erase the rust as cleanly as if it were writing on a chalkboard.  But with Oxifree, prep work is reduced and there is not need to block off the area, just move the dispenser to the area and start the application.  That saves time and money.

Read more about Corrosion at the link provided at the bottom of this article. Call us about Oxifree and OxiTape.  We have demos and test samples that will show you how remarkable protection works